In the late 1960's police department members began wearing our current shoulder patch on our left shoulders.  Prior to that time, no patch had been worn.  The patch contains the city seal in the center.  The seal has many details that illustrate Northampton's history.  The City motto appears at the bottom: caritas, educatio, justitia, which means charity, education, and justice. These are three themes that continue to be important to the people who make their homes here. The moths around the outside circle are silk moths, representing the silk industry in Northampton, a short-lived utopian community-based project in the 1800's located in the Florence section of the City. Members of the community were deeply concerned with racial and gender justice, and tried to create a self-sustaining community by raising silk worms (as well as the trees that the worms preferred). During its existence, the Florence community attracted some of the greatest thinkers and activists of the time.

As you look at the seal, you will also see the Holyoke Mountains in the background, and in the right top corner, the structure that looks like a castle represents the unique architecture of our City Hall. Famed architect William Fenno Pratt designed the City Hall building in 1849. Along the bottom of the seal, you will notice scales, representing the scales of justice, since Northampton is the County Seat, and home to the County Courthouse. You will also see a rake and hoe, reminders of Northampton's proud agricultural past - and present. The City is home to the oldest continuously running agricultural fair in the United States, held each September at the Three County Fairgrounds, and to two thriving Farmers Markets. Northampton was also the site of the famous Shay’s Rebellion, a crisis point in early post-revolutionary America. 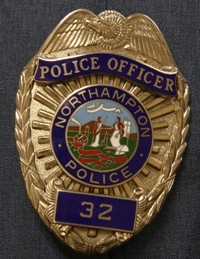 Like our shoulder patch, the department's current badge also contains the city seal in the center.  This version of the Northampton Police Department badge was adopted in the late 1960's.  At the time of its introduction the badge was very distinctive.  However, over the years many other police departments have adopted this same style. One significant change was made to the badge in the late 1980's.  The earlier badges had the title of "Patrolman" inscribed on the rank panel.  That was replaced with the words "Police Officer."  This change was to acknowledge the fact that women had become an integral part of the police force.  It also recognized the ever-expanding role and professional status of those serving their community as police officers.

Badges are worn on the left side of the chest.  Many officers who have received departmental awards wear their commendation bars just over the badge.  These awards include life saving, unit citations, meritorious service, academic achievement, physical fitness, the grand cordon, and more.  All awards are issued for exceptional service in these different areas.  For more information on NPD's departmental awards, visit the sectionof our site titled, "Awards." All sworn personnel at the rank of Officer or Detective are issued silver badges.  All supervisory personnel, including Sergeants, Lieutenants, Captains and the Chief, wear gold badges. 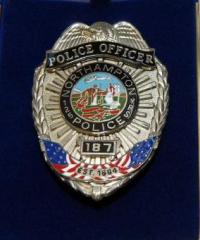 During the 2009 calendar year many officers wore specially designed anniversary badges.  The department celebrated our 125th anniversary and Captain John Cartledge took the time to design a special badge to mark this historic occasion.  The badges were first worn on First Night and were worn for one year and then retired on December 31, 2009.

Prior to 1978 department members wore dark/navy blue shirts with gold metallic buttons and dark/navy blue pants.  The hat was the traditional eight-point cap.  The winter coat was a woolen, hip-length coat called a "reefer."  While the reefer was warm, it was bulky and very heavy.

For the spring and fall the prescribed outer coat was a single-breasted, dress style jacket called a "blouse."  The blouse is still in use today, but it has become part of the dress uniform and is only for formal occasions.

While impressive in appearance, neither the reefer nor the blouse was very practical for use in the field.  Their main disadvantage was that they precluded officers from wearing their full duty belt.  Therefore, officers were limited in the amount of equipment they could wear underneath.  Accessing that equipment from underneath those long, button front garments presented an additional challenge.

In 1978 a radical change was made in the uniform.  Based on the recommendations of a uniform committee, the members of the department voted to change from the dark/navy blue shirt to a French blue shirt with dark/navy blue epaulets.  However, the members chose to continue to have the traditional gold metallic buttons on the new shirts.  The other major change was in the style of police hat.  A change was made from the longstanding, eight-point cap to the round, military style, cap.  A silver metal expansion band was added to the new cap.  These changes have remained in effect to this date.

In the early 1980s a transition was made to an all season nylon jacket with a detachable liner.  This was intended for both cruiser and foot patrols.  Several years later a change was made to a waist length winter jacket and a waist length spring/fall jacket.  These two styles of jackets remain in use to this day.  Additionally, the leather jacket remains an option for cruiser patrol.

All sworn personnel wear French Blue uniform shirts.  Additionally, officers wear "hashmarks" on the left uniform sleeve (long-sleeved shirts only) to display their years of service.  Each hash mark is equal to 3 years of service.  Field Training Officers wear chevrons on each sleeve of their uniforms.  These are veteran officers who have been selected to be a part of the department's Field Training and Evaluation Program (FTEP). 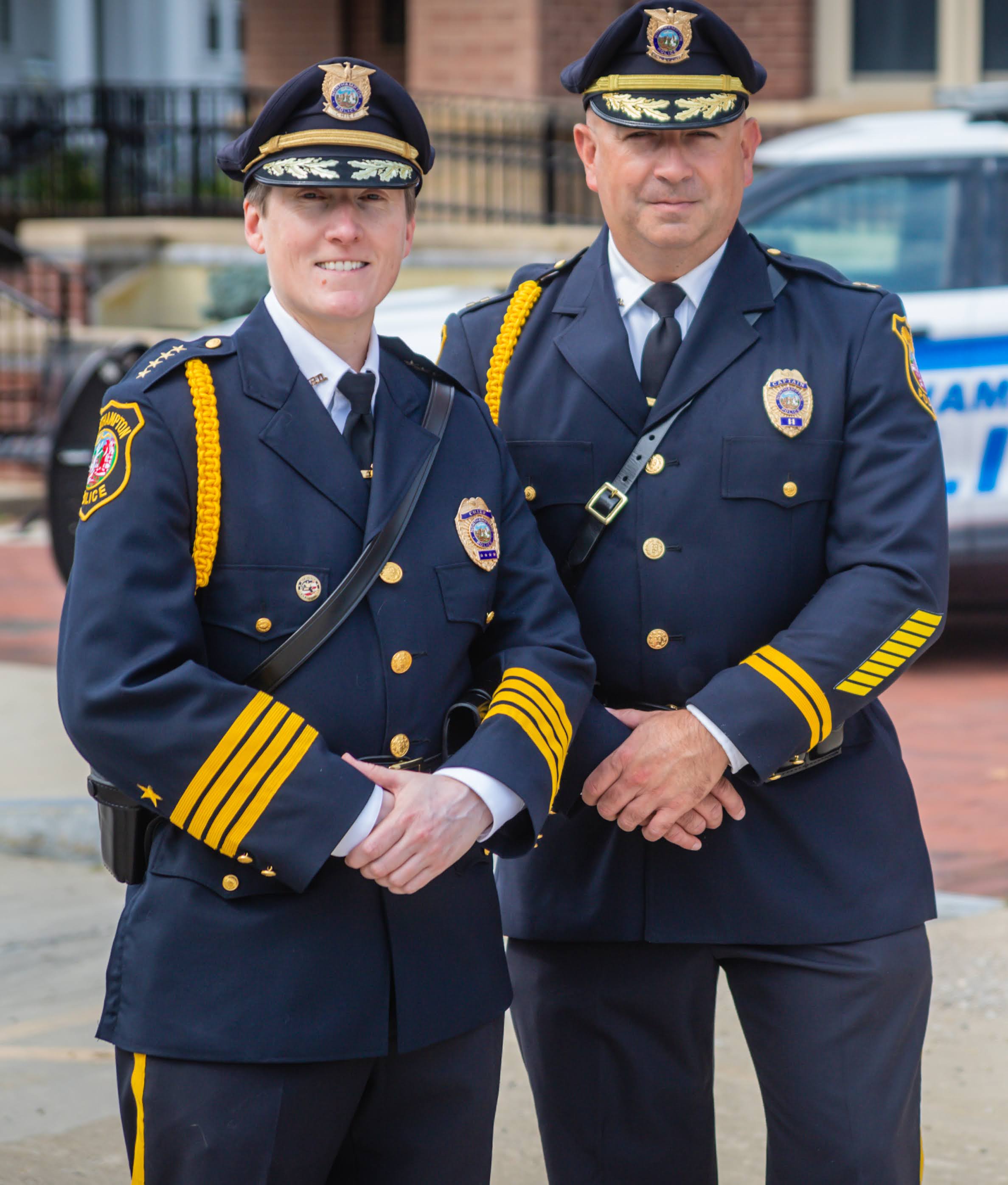 In addition to their regular patrol uniforms, all full-time sworn personnel have dress uniforms.  Dress uniforms include a blazer, duty belt with cross-strap, and a shoulder cord.  Officers wear silver shoulder cords and Lieutenants, Captains, and the Chief wear a single gold shoulder cord.  These administrative personnel also wear a white shirt and striped pants with their dress uniforms.  These uniforms are typically worn at formal events such as academy graduations, parades, swearing-in ceremonies, funerals, or other significant events.  The current dress uniforms were modified in 2014.

In 2019 officers began wearing load-bearing vests to reduce back and neck pain that is commonly affiliated with wearing a heavy belt with a lot of equipment.  These vests hold most of the equipment that officers formerly wore on their waists.  Firearms are still carried on the belt.  These vests are optional.